Attempts to understand human motivation have long been of interest to psychologists. Psychologists studied living beings’ behavior and noticed that all of them followed patterns or behaviors to reach specific goals or needs. Drive theory was the basis for what was known as needs.

One of the most exciting theories of motivation is the Drive Reduction theory. It was popularized by Clark Hull in the 1940s and later extended by Kenneth Spence. It explains motivation by examining the relationship between humans and their environment.

Drive theory is the process our minds go through when trying to reach the desired goal. We have multiple drives that motivate us, and when anyone is activated, it will lead us to different behaviors to attain the desired goal. In this post, I cover more about what can be considered drive and will try to show how drive-reduction theory in psychology works.

Drive reduction theory is a theory of motivation. Living beings are motivated to reduce a drive state and, in particular, explain why we take specific actions rather than others. Simply put, it was developed to explain motivation, emotion, and cognition as the result of physiological needs.

The model is founded on the idea that people are driven by three fundamental drives: hunger, thirst, and sex. These drives represent everyday biological needs that everyone has to varying degrees. Other secondary drives, such as the need for achievement, power, or security, are derived from conditioning.

The inspiration for the theory was the observation that organisms have many innate needs and will go to great lengths to satisfy those needs. It posits that this occurs because the satisfaction of these needs results in tension reduction—lowering the drive’s state of arousal.

What Is the Drive?

Drive is an internal stimulus that motivates an individual to attain a desired goal or end state. It works as internal motivation and is composed of an eliciting condition and a psychological feeling state. Drive is often associated with the processes of reward, punishment, and pleasure. Furthermore, drive differs from emotion because it is a process instead of a feeling.

In other words, it is a biological or psychological need—for example, hunger, thirst, sex, and sleep. It is a state of tension when an organism requires something lacking in its environment. For example, the need for water creates a drive that motivates the organism to seek out water.

According to Hull’s theory, the drive is the desire for a renewal of body function and reducing physiological tension. The main component of drive-reduction theory is the principle of homeostasis. This principle states that the human body strives to maintain equilibrium and balance after disturbances.

As stated above, Hull’s theory posits that organisms are born with various innate drives, such as hunger and thirst. Each of these drives is characterized by a particular internal state that must be removed for the organism to be satisfied. Removing this internal state leads to a change in behavior (i.e., the organism eats)—for example, hunger results in eating because eating eliminates the sensation of hunger. 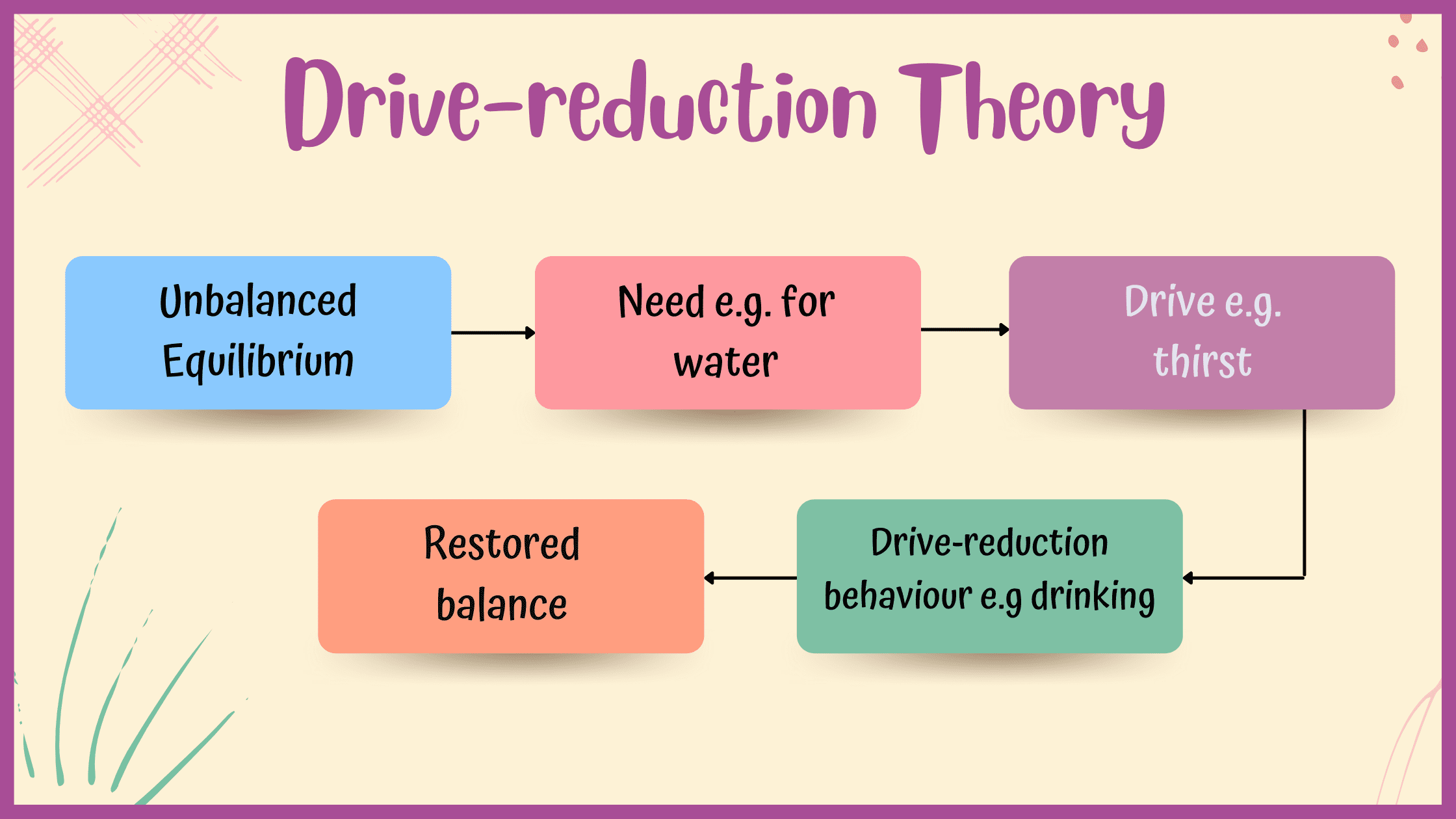 Hull’s mathematical deductive theory of behavior is a mathematically based approach to psychology and the study of motivation to understand human behavior. The formula is given below:

V = Stimulus intensity dynamism refers to the variance in a person’s response attributed to environmental changes. It indicates that certain stimuli can drive human behavior greater than other stimuli.

D = Known as Drive strength, it is the potentiation of behavior that has been reinforced.

K = Incentive motivation is the degree to which you desire a particular goal to achieve.

J = The length of time you need to wait before trying the behavior again.

sHR = The strength of a habit is the number of times you have performed that behavior.

slr = Conditioned inhibition is how often you have done a behavior that did not get the desired result.

lr = Reactive inhibition describes fatigue that occurs after you have been active.

sLr = The reaction threshold is the minimum amount of reinforcement required to acquire a new behavior.

While Hull’s theory was an essential part of the development of behaviorism, it was not without its detractors and criticisms around it. In his drive-reduction theory, motivation is described as a process in which a goal is presented first, and the person tries to satisfy that goal by acting. This action then results in a decrease in drive, thus giving the subject a feeling of satisfaction.

The theory has been criticized for ignoring other motivational factors. It has been argued that Hull’s version of motivation is too narrow because it deals only with our primary reinforcers and ignores how secondary reinforcers* reduce the drive.

For example: if a person has a strong desire to achieve something, they will work hard to fulfill their goal. This may contradict Hull’s theory that achievement-motivated people only work hard because they want money or power (two non-physiological motivators).

Money does not directly decrease your physical drives, such as thirst and hunger, but it can act as a source of primary reinforcement. In this way, the money you earn can be used to satisfy those primary drives. This is because money is a social tool that allows us to access necessities such as food and shelter.

Other psychologists have widely criticized Hull’s theory of drives for being too. Drive reduction theory is one of the most influential theories for understanding human behavior, especially motivation and reinforcement. The Hullian theory of motivation has been largely abandoned by modern psychology.

However, it is still worthwhile to understand Hull’s work’s effect on subsequent researchers and how it contributed to later theories in psychology.

Dementophobia: What It Is and How to Cope

What Is a Perceptual Set in Psychology?