A Look at Generativity vs. Stagnation Developmental processes are fundamental to the human life course. In particular, psychosocial development is a continuous process involving the creation of specific competencies for managing life’s challenges. One broad category of developmental outcomes is generativity vs. stagnation.

Erik Erikson developed the concept of generativity versus stagnation to describe the psychosocial development of middle adulthood. Between ages 40 and 65, this period is characterized by the conflict between generativity (nurturing the next generation) and stagnation (failing to leave a lasting impact beyond yourself).

Erikson created it in the sense of optimal growth and maturation of an individual. It attempts to show how people progress through various stages in their lives. This blog post will provide a brief review of these two counteracting tendencies in person-environment interaction, emphasizing the more humanistic side of the discussion.

By definition, generativity involves contemplating and planning for the welfare of future generations. Psychosocial development focuses on raising children and contributing to society by creating a better world for their progeny. In this chapter, we can look at generativity from two different angles: first, as a unique personality characteristic that contributes to well-being during adulthood, and second, as a set of activities and values that predict successful parenting.

Generativity theory claims that individuals need to make a positive difference in the world and that a person should actively contribute towards shaping their environment and improving future generations. This concept has significance for our general understanding of human functioning in large and more intimate areas, such as marriage and family.

In a family setting, generativity can be described as an expression of love and responsibility over time. Generativity can be seen through the act of parenting (of both children and grandchildren) or grandparenting and through taking care of younger siblings or cousins while caring for aging parents.

Tasks associated with generativity include:

People high in generativity possess several characteristics. They see themselves as part of something larger than themselves, have a sense of responsibility toward others, and feel they have something important to contribute to their relationships. These individuals are willing to help their children and any person or group in need.

Additionally, the following are some of the essential characteristics associated with generativity:

How Does Generativity Manifest?

Generativity versus stagnation is the sixth of Erick’s eight stages of psychosocial development. Psychologists believe that this conflict occurs during the mid-40s and 50s when people begin to ask themselves whether they have lived a useful life. If they have not, they tend to experience a crisis, which may manifest itself in several ways:

Generativity is associated with intrinsic motivation and self-efficacy (the belief that one has the power to succeed). The experience of autonomy and relatedness can also motivate people to participate in healthy behaviors. People who experience these emotions are more likely to develop a strong sense of purpose in life and may try to constructively channel their energies toward things that will benefit the larger community, such as exercise or nutritious eating.

For example, people may be more likely to quit smoking if they believe their behavior will inspire others to quit. Also, if you’re trying to lose weight for yourself, staying active might not be enough to keep you motivated. If you want to lose weight so you can be an example for your kids, that could make a big difference in your motivation level.

There are many ways of contributing to the world and developing a sense of generativity. In many cases, parenting is a crucial factor. By helping someone else develop, it is possible to facilitate one’s development. Erikson’s theory explained how people develop over time, but he also believed certain stages were essential for specific demographic groups.

For example, people with a strong sense of generativity often have had children or helped raise others. This allows them to contribute to making them feel like they are making a difference in the world. Similarly, those who were part of older generations might find that helping their children become adults helps them gain feelings of generativity in their later years.

Generative adults tend to focus on developing others. They take active roles that enable them to mentor others, teach skills and knowledge, or serve as productive contributors. Generative adults are also effective listeners who care about others’ opinions and desires.

They are engaged in activities that foster a sense of community and a sense that one is contributing to society through meaningful actions that benefit themselves and others.

People who feel a greater sense of generativity can see their place in the world and take comfort in knowing they will leave an imprint behind when they are gone. This comfort level with life can help these individuals realize that what they do matters today and helps them find fulfillment in their daily lives.

How to Improve Generativity?

Generativity is all about creating a legacy or contributing to the next generation. One way to encourage generativity is participating in your community, contributing to a sense of meaning and purpose. Trying to make the world a better place may not be as easy as it sounds, but it’s always worth a shot. Here are some ideas for how you can get involved:

Stagnation in psychosocial development refers to the relative absence or scarcity of movement in an individual’s psychological or emotional well-being. Psychosocial stagnation can be thought of as a complete cessation (or diminishment) of progress in an emotional sense at any point in time and is characterized by passivity on the part of the individual and dependence and interdependence on the individual others.

This state is characterized by a lack of desire to grow, unwillingness to change the situation, the inability to solve problems, and make decisions, fear of responsibility, and so on. Further, characteristics can also include: 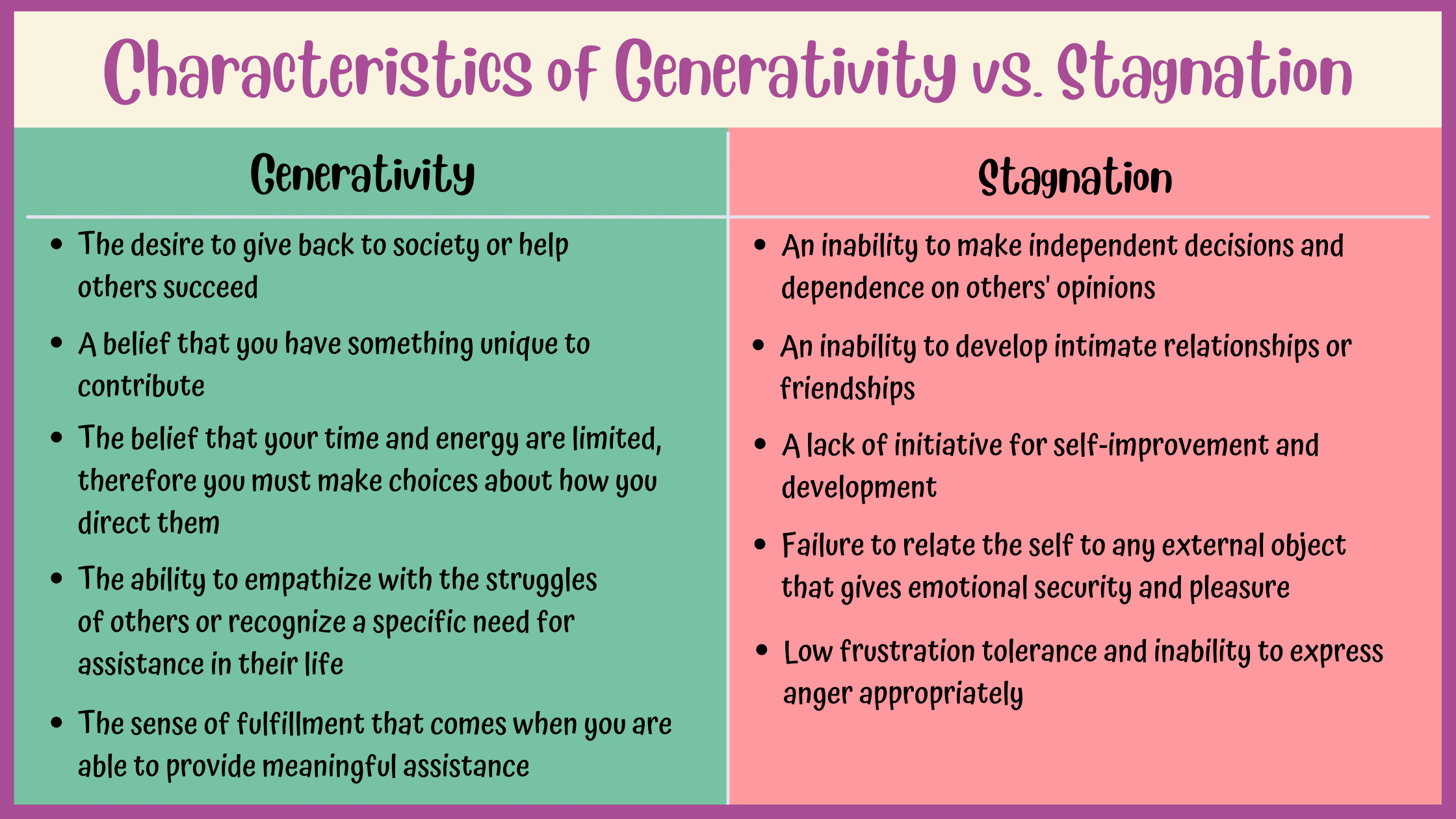 Stagnation is a feeling of being stuck, of not progressing in life. When you are stagnant, you feel like your life is motionless and not going anywhere. You may feel that you have stagnated in one aspect of your life, such as a job or relationship.

However, it can be stagnant in multiple aspects of your life, including work, family, and personal relationships. Stagnation can result into:

How to Decrease Stagnation?

While these feelings may seem inevitable to those experiencing them, some things can be done to improve feelings of stagnation in life. The following are some steps that are helpful when trying to move away from stagnation into generativity:

Pick the ones that excite you the most and start exploring them. You shouldn’t just think about the things you’ve always enjoyed doing but also things that might give you a new perspective on life. Hobbies are supposed to be fun, so don’t choose something that feels like work.

You might not realize it, but there is so much out there that you have yet to learn. Most people don’t take the time to learn anything new because they are too busy focusing on the tasks at hand. But knowing something new can inspire you in so many ways that it is worth taking the time out of your day for it.

When we think about the future and what we want to achieve, we are more likely to feel inspired by our dreams. This list should include both long-term goals and short-term goals.

The distinction between generativity and stagnation in psychosocial development is not ascertained. It is essential to examine the characteristics of these two phenomena before discussing their implications for psychosocial development. Understanding generativity versus stagnation also sheds light on an adolescent’s worldview and capacity for self-help.

To deal with generativity versus stagnation, some people take on mentoring roles to pass their knowledge on to young people to help them succeed. Others find purpose in work that has implications for future generations, like conservation efforts or addressing climate change.

What Is Fearful Avoidant Attachment?

Arachibutyrophobia and Ways to Treat It