The Trichromatic Theory of Color Vision If you have ever noticed that some colors seem to be mixtures of two other colors when you look at the color wheel, then you have already experienced color theory in action. Our eyes and brain process the different colors that we see is called a trichromatic theory. This is one of the most fundamental theories about color and how it works and one of the essential concepts in all art and design.

Why trichromatic theory matters: It is a big part of why many people see similar colors differently. For instance, a person with dark brown eyes and dark brown hair will see variations of brown differently than someone with light blue eyes and blond hair. The reason is how their eye cells are set up to receive light waves. It is the most widely accepted theory for how we humans see color and explains how light is absorbed by the three types of cones in our eyes: red, green, and blue. This article will dive deeper into trichromatic theory and learn how it differs from opponent-process theory.

What Does the Trichromatic Theory Explain?

The trichromatic theory states that three different types of cones in the eye (red, green, and blue) are responsible for converting light into electrical signals. These three types of cones each respond to different wavelengths of light, which can be combined to create all the colors we see in the visual spectrum. The theory was first proposed by Thomas Young in 1802, with information later provided by Hermann von Helmholtz.

How Does Color Vision Work?

Color vision is the ability to live beings to distinguish objects based on the wavelengths (or frequencies) of the light they reflect, emit, or transmit. The physiological cause of color vision in humans is that cells in the retina are sensitive to different wavelengths of light.

Light rays reflect off the surface and enter your eye when you look at an object. Part of your eye, called the retina, contains special cells called cones that sense the wavelengths of light. There are three types of cone cells, each responding to a different range of wavelengths — short (blue), medium (green), and long (red).

The brain receives information from the different colors and combines them into one image that makes sense. Your brain also uses visual cues such as brightness, shadow, and contrast to interpret what you see. The human eye can detect approximately 10 million colors.

What Are the Main Principles of the Trichromatic Theory?

From the early experiments of Helmholtz, we know that three types of cones in our retina are mainly responsible for color vision. So, the trichromatic theory’s first principle is that there are three distinct cones (each cone has a different kind of photopigment) in our retina, mainly responsible for color vision. These three different types function by absorbing light with different wavelengths. 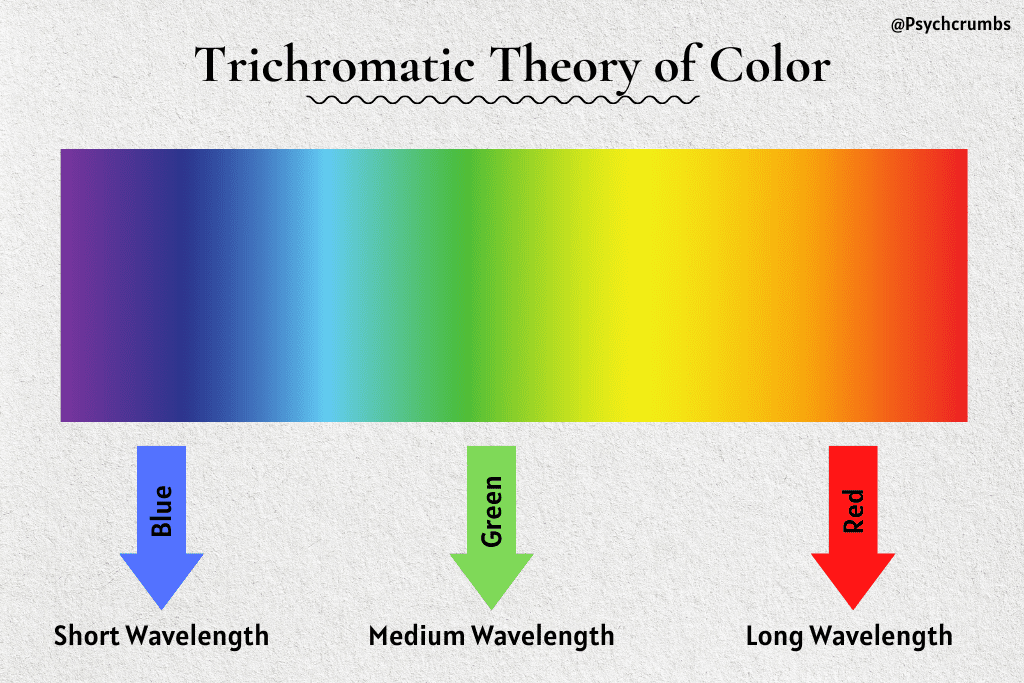 In the latter part of the seventeenth century, British scientist Sir Isaac Newton, best known for his theory on gravity, demonstrated that white and all other colors could be created by mixing two or more kinds of light. However, some physicists claimed that three primary or elementary colors were necessary for creating all other colors in the eighteenth century.

In 1758, Tobias Mayer theorized that all spectral colors were caused by different mixtures of three kinds of light, namely red, yellow, and blue. Scientists found early in the eighteenth century that although the color range visible to humans is relatively small, white light consists of many wavelengths. To explain how we see colors, Thomas Young modified Newton’s theory and introduced the trichromatic theory in 1802. 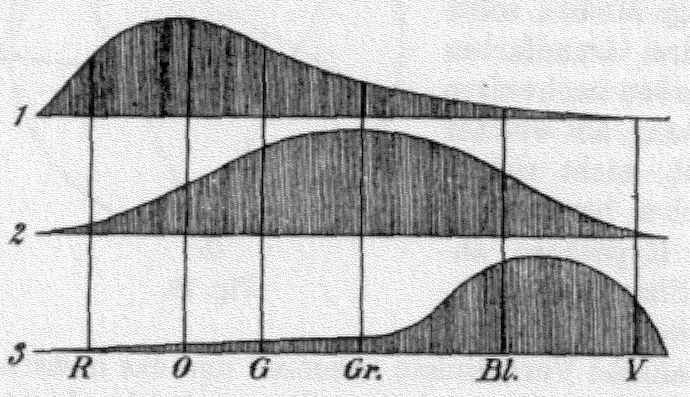 Trichromatic Theory vs. Opponent-process: How Do They Differ From Each Other?

The opponent-process theory states that there are three pairs of opposing colors. These three pairs of colors include red vs. green, blue vs. yellow, and black vs. white. This theory states that each color triggers the production of its opposite color in the brain. For example, when you look at a red object, your brain produces green retinal receptors and vice versa.

On the other hand, the trichromatic theory proposes three types of cones; red cones, green cones, and blue cones. All different colors are mixes of these three primary colors. For example, yellow is a mix of red and green, while violet is a mix of red and blue.

Another difference between the two theories is that the opponent-process theory considers afterimages while the trichromatic theory does not.

In summary, the trichromatic theory of color vision is a theory that states that all human beings have three types of cone cells in the retina in their retinas that are responsible for detecting three different wavelengths of light. This then allows human beings to distinguish a large variety of colors. However, this mechanism can also be affected by other mechanisms, such as color blindness, which causes people not to detect specific wavelengths.