Delta waves, sometimes called slow-wave sleep, occur when you are in deep sleep and dreamlessness. This stage of sleep is where most healing and regeneration happen. Delta waves are very relaxing and rejuvenating. Promoting a healthy balance of relaxation and rejuvenation helps recover from stress caused by external factors, such as pollution.

Although the term “delta waves” is often thrown around in the medical field, there tends to be a high degree of confusion surrounding these brain waves. That’s because delta waves are subtle and difficult to measure. This can make it hard to produce a complete picture of all their distinctions. As a result, a few questions people commonly ask about delta waves don’t always get answered in one place.

What Are Delta Waves?

The delta wave is a type of brain wave that can be detected in an electroencephalogram (EEG). They are the slowest-frequency brainwaves. They occur in a deep sleep and during other states of unconsciousness when there is no sensory stimulation.

Delta waves are generated by the thalamus, a part of the brainstem responsible for relaying sensory information from all over the body to the cerebral cortex, where conscious perception occurs. The thalamus also regulates consciousness by suppressing incoming stimuli when you’re sleeping or unconscious.

Delta waves have several characteristics, including:

How Do Delta Waves Work During Sleep?

This can tell us a lot about what’s happening inside your brain at any given moment — including what type of wave frequency you’re experiencing at any given time during sleep!

There are four stages of sleep, each with its characteristics:

Stage 1: Theta brain waves are present with frequencies between 4 and 7 cycles per second. The first stage of sleep is light sleep, which lasts 5 to 10 minutes. During this time, you might feel like you’re falling asleep, but your brain waves are still active.

Stage 2: Sleep spindles and K-complexes appear. Your eyes begin to move slowly under your eyelids. Your heart rate and blood pressure slow down, signaling your body is beginning to rest. Brain activity slows down, and your muscles relax. This stage lasts 10 to 20 minutes after light sleep ends.

Stage 3: Delta waves with frequencies less than 3.5 cycles per second are prominent. Your body relaxes, and your blood pressure drops as your heart rate slows. In deep sleep, you’re less responsive to external stimuli and will not wake up quickly during this stage.

Stage 4: Also known as REM (rapid eye movement) sleep, this is the deepest phase of sleep where dreaming occurs. This phase usually starts about 90 minutes after falling asleep and can recur several times throughout the night. 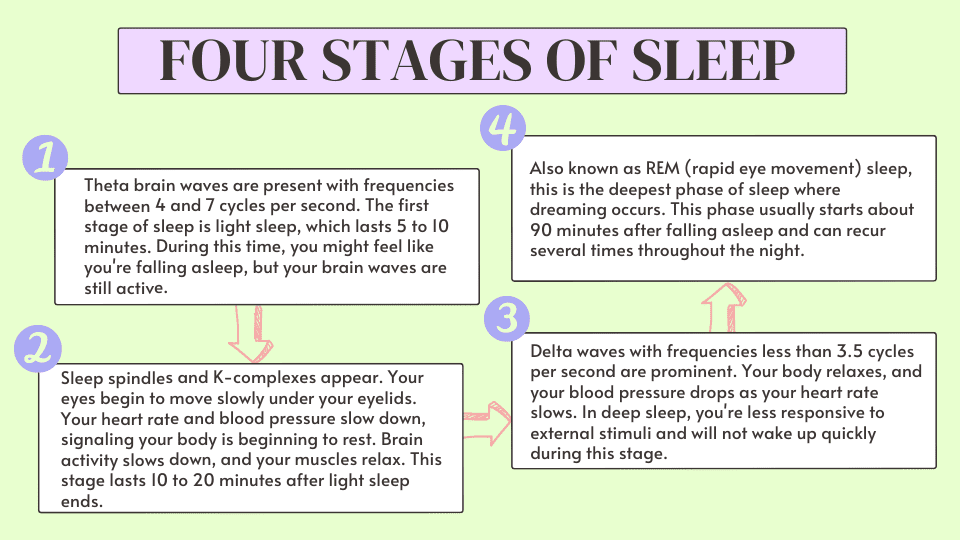 Delta waves are significant because they help regulate the sleep-wake cycle, which keeps us healthy and alert during the day and gives us a good night’s rest. When asleep, your body releases growth hormone, which helps repair damaged cells and build new muscle tissue. During delta sleep, your immune system is also strengthened so that you’re better prepared to fight off infections when you’re awake.

Some of the benefits of delta waves include:

As discussed above, delta waves are the slowest of all brainwaves, with a frequency range between 0.1 Hz and 3 Hz. Delta waves are associated with deep sleep, trance, and unconsciousness.

On the other hand, a binaural beat is an auditory illusion perceived when two different pure-tone sine waves are presented separately, one to each ear, using stereo headphones. For example, if a 200 Hz pure tone is presented to a subject’s right ear and a 230 Hz pure tone is presented to the subject’s left ear (through stereo headphones), the listener will perceive the auditory illusion of a third tone, in addition to the two pure-tone frequencies. The third sound is called a binaural beat.

Alpha waves are generally associated with states of relaxation and drowsiness. They typically appear briefly before one falls asleep or during meditation, yoga, or other forms of relaxation. On the other hand, Delta waves are typically seen in individuals who are deeply asleep or under anesthesia. Alpha waves have a frequency range between 8–12 Hz.

Delta waves are the slowest brain waves. They are seen in deep sleep and intense meditative states. These waves can be identified by a frequency between 0-4 Hz.

Beta waves are the most common type of brain wave. These occur when you are awake, alert, active, and engaged in problem-solving or other tasks that require high concentration. Beta waves can be identified by a frequency between 13-40 Hz.

Delta waves are crucial for maintaining deep, restorative sleep, the kind you need to have a well-rested body and mind. And when your brain is in this state, it helps you remember things better, focus better on tasks at hand, and improve motor control and perception, among other benefits.

Hopefully, this post has done much to convince you of the importance of delta waves in the human brain. Learning how to produce more delta waves in your brain is perhaps one of the most important things you can do for yourself, and much research has been conducted over the past few decades on the benefits of increased delta wave activity.