What Is Secondary Reinforcement? When the pleasure from the reward is still experienced after it has been removed, the person will associate more satisfaction with that reward. Unlike primary reinforcement, secondary reinforcement does not naturally occur in many situations and must be taught. Primary reinforcement occurs naturally when a person considers it rewarding; for example, a happy event produces feelings of elation or joy.

What Is Secondary Reinforcement?

Primary reinforcers are rewards in themselves, like food or water. In the above example, primary reinforcers don’t have to be taught to the dog; he instinctively knows they’re good things because they meet some strong need, like hunger or thirst.

Secondary reinforcers aren’t inherently rewarding; instead, they’re linked to something else that is rewarding — something that has already been learned as a primary reinforcer. When a reinforcer is paired with a neutral stimulus, it becomes a conditioned reinforcer. 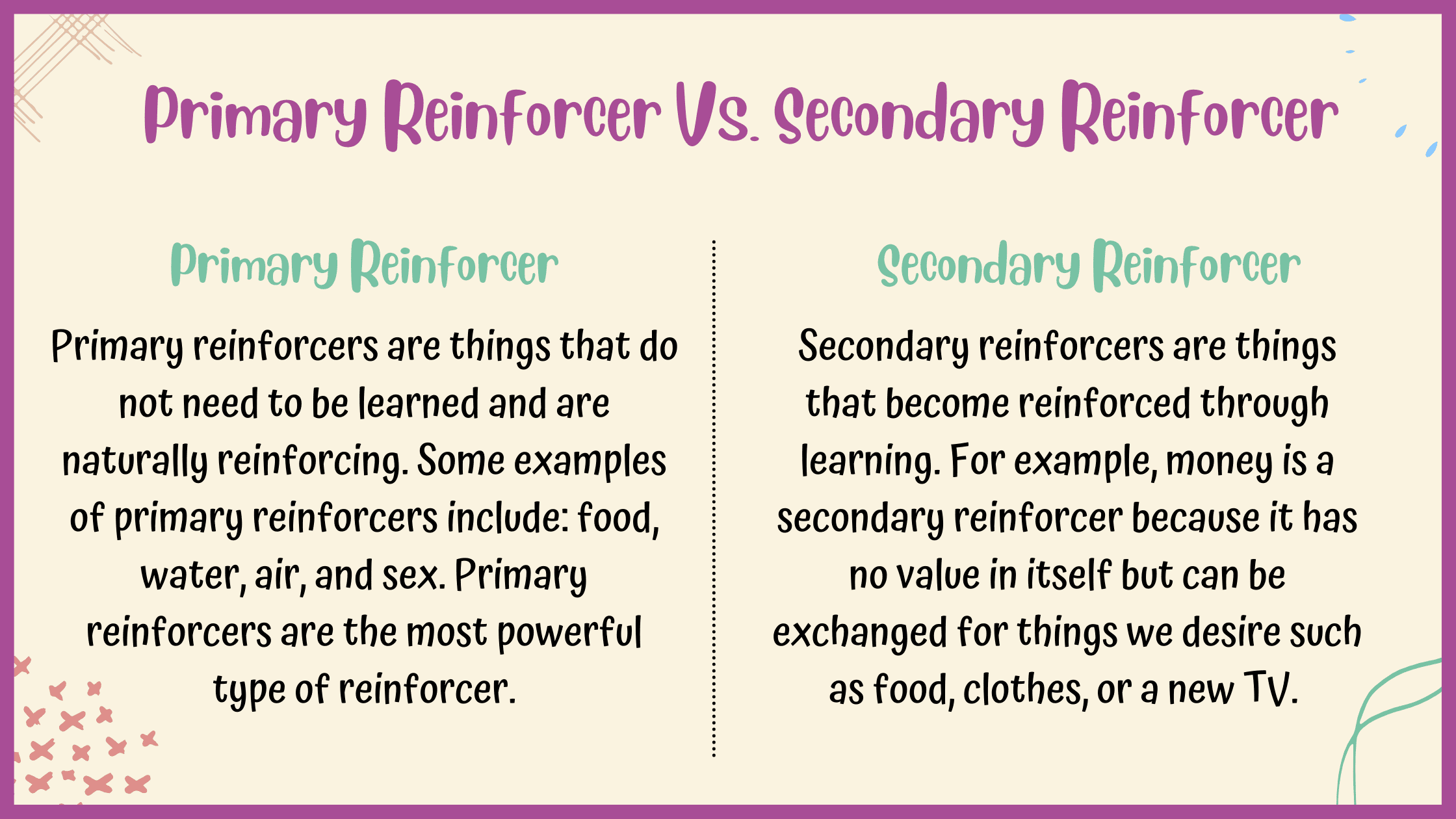 In the above example, when a neutral stimulus (such as a bell) is paired with food, the sound of the bell becomes associated with the food and eventually functions as a reinforcer. A secondary reinforcer can be anything that has acquired its reinforcing properties through learning.

Consider a situation where you want to increase a person’s performance on a task, such as finishing their homework or doing better at work, so you decide to reward them each time they do it. By rewarding them for doing that task, you’re reinforcing that behavior because it increases the likelihood of it occurring again in the future. This type of reinforcement is known as positive reinforcement because your actions positively affect others.

On the other hand, punishment weakens a behavior by giving someone an unpleasant consequence or taking away a pleasant result to action. Both positive and negative involve using reinforcements to help increase the frequency of an activity or behavior. In both cases, we reinforce an action by rewarding it somehow. We reward it with something positive (positive reinforcement) or eliminate something negative (negative reinforcement).

So, What’s the Difference Between Negative Reinforcement and Punishment?

Here are some examples of secondary reinforcement:

This can make learning new behaviors much easier because they can be reinforced with whatever the most convenient reward may be. For example, money may not be available while shopping, but food can still serve as a reward for checking out quickly at the store.

The learning theory behind secondary reinforcement is sound: a reward for completing something is more powerful than before you start. And using freedom as a bonus is a great idea too.

For this reason, secondary reinforcement is one of the most effective methods used by psychologists. It is simple and easy to use, making it a popular method for practitioners in the field. It can treat many psychological problems, such as eating disorders, obsessive-compulsive disorder (OCD), post-traumatic stress disorder (PTSD), and depression.

What Is Enmeshment Trauma and How to Deal With It?

What Is Fearful Avoidant Attachment?